Beyond the Wall - Zeugen In Stein

"He who fights with monsters should look to it that he himself does not become a monster."

Maxims and Interludes: Beyond Good and Evil
Nietzsche 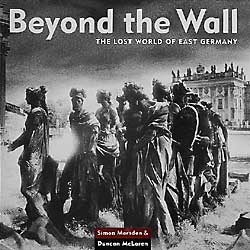 Shortly after the Berlin Wall was dismantled in 1989, celebrated photographer Simon Marsden and author Duncan McLaren embarked on a journey in the former Communist State of East Germany - their aim to capture on film a "lost world" that has remained hidden from the eyes of the West for almost half a century.

Their travels took them through each of the five states, from the environs of Berlin into the devastated city of Dresden, and the countryside close to the Polish and Czechoslovakian borders - where they found awe-inspriring monuments and buildings dating from medieval times up until the early part of this century. The aristocratic families had been dispossessed and their estates turned into wasteland, asylums and ruins. Towns and cities that had suffered the ravages of World War II had been left to decay, and, as a final insult, hideous factories had been built amidst the beautiful landscape under the Communist regime.

Beyond the Wall is a collection of outstanding photographs of palaces, castles, abbeys, statues, effigies and follies in these confiscated lands. Beautiful, sad, decadent, and sometimes sinister ghosts of another age are captured here for posterity. Whilst the atmospheric photographs portray the peaceful, faded grandeur of these places, such as Sanssouci, Frederick the Great's fantastical palace in Postdam, or Branitzer Park in Cottbus where Prince Pückler-Muskau built a vast pyramid in the middle of a lake as a mausoleum for his favourite horses, the accompanying text tells a very different story - one of shocking brutality and violence. First-hand accounts and the authors' own observations and experiences are combined to create a vivid and lasting testament to this forgotten time. Beyond the Wall is a poignant reminder of things past.

Hardback only copies are available through The Marsden Archive priced at £35 signed and £30 unsigned. Click here to order. No more than 2 copies of each book is available to purchase at one time.