I came on a great house in the middle of the night,
Its open lighted doorway and its windows all alight,
And all my friends were there and made me welcome too;
But I woke in an old ruin that the winds howled through;
And when I pay attention I must out and walk
Among the dogs and horses that understand my talk,

The Curse of Cromwell
W. B. Yeats 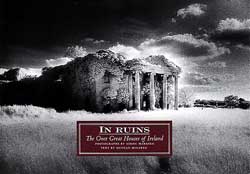 "There is such a beauty in ruins, such a stillness, and magic for the imagination." (from the author's Foreword)

Here, spanning eight centuries, are the haunting ruins of Ireland. Its once great houses and castles, many designed for the Anglo-Irish aristocracy by the most accomplished architects of their day, bear witness to a troubled history of civil war, famine, land acts and private bankruptcy, Splendid in their prime, the ruins have absorbed the romantic beauty and mystery of the surrounding landscape - qualities captured in these seventy atmospheric photographs by Simon Marsden. Duncan McLaren's intriguing text weaves history and hearsay into one, vividly recalling the lives and fates of the people who lived there, These leftovers of another age enhance the Irish sense of separateness, almost of desolation. Their peculiar charm makes them unique.

Originally published in 1980 and later acclaimed as a collector's item, this expanded edition features an additional thirty photographs by Simon Marsden, including those for eleven new locations. Duncan McLaren has completely revised his text to incorporate newly uncovered information.

This book is no longer available/out of print.