Ghosthunter - A Journey through Haunted France

‘And the monk told me stories, all the old stories of this place, legends, always more legends.

One of them particularly struck me. The local people, the ones who live on the hill, claim they hear voices at night in the sands. They say they hear two goats bleating, one with a strong voice, the other with a feeble voice. Scoffers assert they’re the cries of seabirds, which sometimes resemble bleating, and sometimes human moans; but late-night fishermen swear they have seen, roaming about on the dunes, between the two tides, around the little town cast so far from the world, an old shepherd, whose head, covered with his cloak, could never be seen; and who led, walking in front of them, a billy goat with a man's face, and a nanny-goat with a woman's face, both with long white hair, talking ceaselessly, arguing with each other in an unknown language, then suddenly stopping to bleat with all their might.

I said to the monk, ‘Do you believe this?’ He murmured ‘I don’t know!’

I said, ‘If other beings besides us exist on Earth, why didn’t we meet them a long time ago? Why haven’t you yourself seen them? Why haven’t I seen them myself?’

He replied, Do we see the hundred-thousandth part of what exists? Look, here is the wind, which is the strongest force in nature, which knocks men down, destroys buildings, uproots trees, whips the sea up into mountains of water, destroys cliffs, and throws great ships onto the shoals; here is the wind that kills, whistles, groans, howls have you ever seen it, and can you see it? Yet it exists.’ 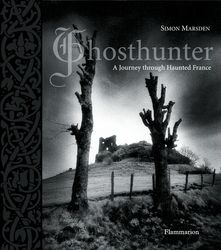 Armed with his camera, Sir Simon Marsden has persued the elusive trace of ghosts for nearly 40 years. He has published ten books of his photographs including The Journal of a Ghosthunter: In Search of the Undead from Ireland to Transylvania (Little Brown, 1994) and The Haunted realm: Echoes from Beyond the Tomb (Little Brown, 1998). His passion for haunted places, which began as a child in the English countryside, has led him naturally to France, into the châteaux, cemeteries, abandoned ruins, and forests around which famous ghost stories have circulated for centuries. From Saint-Germain-en-Laye's history shrouded in black magic to Saint-Bonnet-le-Châteu's mysterious cadavers and from Chenonceau's feuding women to the Gisor Fortress with its hidden Templar treasure, the author takes us on a riveting ghost hunt across France. Illustrated with supernaturally beautiful photographs, the travel journal unveils France's darkest secrets and most terrifying legends.

Hardback only copies are available through The Marsden Archive priced at £40. Click here to order. No more than 2 copies of each book is available to purchase at one time.