‘In all the darkest pages of the malign supernatural there is no more terrible tradition than that of the Vampire, a pariah even among demons.’
The Vampire: His Kith and Kin, Montague Summers (1880 - 1948) 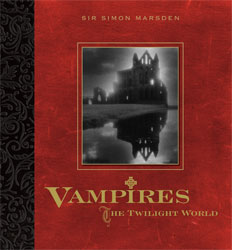 The Vampire, a half-human figure clad in mystery and darkness, has haunted man’s imagination since the dawn of time. The ancient Greeks, Romans, Egyptians and Chinese told tales of demonic creatures and bloodsucking spirits that are considered the precursors of modern-day Vampires. These fears grew in the Middle Ages, during the period of the great plagues, when dark, bloated corpses – so different from the elegant , aristocratic blood-drinkers depicted in later literature – were reported to rise from their tombs and feast on the blood of innocent victims. But it was in the early part of the eighteenth century, in Slavic Eastern Europe, that belief in such legends became so strong that in some areas it created mass hysteria, leading to the frequent defiling of corpses of those believed to be the undead. This region, which included Romania, Hungary, Serbia, Silesia, Moravia, Bohemia and Russia, soon came to be viewed by the West as a ‘land of darkness’ and an ‘abyss of the human soul’. Its notorious vampiric figures such as Vlad Tepes or Vlad the Impaler, the inspiration for Bram Stoker’s Count Dracula, and the sadistic Elizabeth Bathory, the Blood Countess, contributed to this image of supernatural terror that pervaded the population’s folklore.

It is of course hard for us today, in our more civilised and scientifically advanced world, to realise that our ancestors were once genuinely terrified by these unholy bloodsucking creatures who they believed were responsible for spreading the plague, and that some people even feared that they themselves were turning into Vampires. This was of course a time when medical science was in its infancy, and fear and superstition were the only way for people to interpret things that they struggled to comprehend. I wonder how many of today's youthful generation of Vampire enthusiasts, drawn into the genre by the phenomenal success of the many books, films and television series on the subject – The Twilight Saga, The Vampire Chronicles and True Blood to name but a few – can truly grasp the terror that the image of a Vampire evoked in those dark times?

In medieval times man saw very few images, so those he did see had a powerful effect on his imagination. What we view in a single day in our modern, technological world, he might see only through the course of a lifetime. With the myriad of sophisticated information available to us, it is easy to think that the ancient world of superstition, of ghosts and Vampires, is now far away and long ago – a thing of the past. But is it? The nights are still dark, winter is still cold, and the future is still unknown …

Hardback only copies are available through The Marsden Archive priced at £20. No more than 2 copies of each book is available to purchase at one time. Sold out!