And travellers now, within that valley,
Through the red-litten windows see
Vast forms, that move fantastically
To a discordant melody,
While, like a ghastly rapid river,
Through the pale door
A hideous throng rush out forever
And laugh - but smile no more. 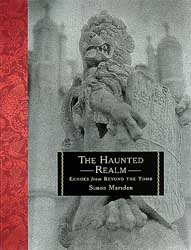 Photographer Simon Marsden's fascination with the supernatural began in childhood as he played hide-and-seek in the ancient attic of his family's archaic house, ever vigilant for the appearance of the 'family ghost'. It wasn't until later that he discovered the craft of photography and developed an enduring fascination with the magic of time and light and the enigma of 'reality' that these elements conjure up. It was when these dual interests fused that Simon's own particular artform was born. His startlingly atmospheric black and white images reveal a hidden world and the ghostly, beguiling and often chilling images transport the reader to a different realm, a haunted realm, where nothing can be taken at face value and where what we believe to be reality may not be quite all it seems...

The Haunted Realm is a collection of outstanding photographs of eerie and fascinating places throughout England, Scotland, Wales and Ireland. Houses and mansions, castles and abbeys - Simon has left no stone unturned in his quest to capture the ghostly nature of these strange places on film. Accompanying the photographs is his intriguing text which describes the apparitions or spirit manifestations that have been reported at each particular site and the strange and often macabre real-life events that are believed to have caused the hauntings.

Originally published in 1986, this expanded and redesigned edition features an additional 31 photographs, including those for 17 new locations.