This magnificent and spectacularly turreted ruin was once home of the Lowthers, who became the Earls of Lonsdale. Abandoned in 1936, it is haunted by an eccentric member of this powerful family, Sir James Lowther, or 'Wicked Jimmy' as he was better known. He was described by Thomas de Quincey, author of Confessions of an English Opium Eater, as a 'true feudal chieftain in both appearance and deed, who took delight in expressing his disdain for modern refinement by the haughty carelessness of his magnificence'. 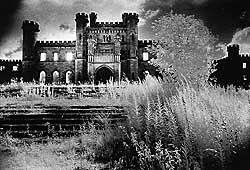 He inherited the estate in 1784 and was greedy for power in both business and politics. His downfall was his romantic nature. While enduring an unsuccessful 'arranged' marriage, he fell in love with a beautiful young woman, the daughter of one of his tenant farmers. But, as she was not of his social standing, he was forced to keep her as his mistress, albeit in great style at a manor house in Hampshire. For a while he was happy, but when she grew ill and died suddenly he refused to accept that she was dead. His servants dared not mention it and he left her body lying in bed as if nothing had happened; it is said that sometimes he would even dress her himself and sit her at the dinner table, until his servants were no longer able to endure the stench of her putrefying flesh.

Sir James then had her moved to another of his properties in Cumberland, Maulds Maeburn Hall near Lowther, where her body was placed in a glass-lidded coffin, which he left in a cupboard so that he could return to gaze at her. She was finally buried at Paddington Cemetery in London, where he ordered a company of Cumberland militia to stand guard over her tomb for several weeks.

He returned to Lowther, where he became subject to long fits of depression, walking alone in the woods for days on end. The estate suffered, the castle began to decay and wild horses roamed the park. Sir James died in 1802, unloved and unmourned. His spectral coach and ungroomed horses can still be seen careering through the parklands of the castle on a moonlit night, whipped on by his manic and dishevelled ghost.