"To be buried while alive is, beyond question, the most terrific of these extremes which has ever fallen to the lot of mere mortality. That it has frequently, very frequently, so fallen will scarcely be denied by those who think. The boundaries which divide Life from Death are at best shadowy and vague. Who shall say where the one ends, and where the other begins?" 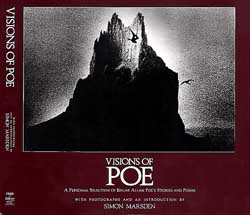 Edgar Allan Poe has influenced many writers, artists and composers over the years including Baudelaire, Debussy, Manet, Mallarmé, Rimbaud and Dostoevsky. He has always held a special fascination for Simon Marsden, who says "... Poe's works have influenced me more than any other writer".

Simon Marsden's unique style of photography, using mainly infra-red film and specialized printing techniques, creates fantastic and dream-like images. A selection of the mysterious tales and poems of Poe are here visually interpreted with photographs of outstanding quality and perception, capturing the world as Poe envisaged it in his romantic but tortured imagination.

While Poe is best known for his "darker" works, he also wrote many romantic and haunting poems of exquisite beauty which his great admirer Baudelaire described as "... deep and shimmering as dreams, mysterious and perfect as crystal.". Visions of Poe contains a fascinating cross-section of his writing moods from the haunting poem Annabel Lee to the chilling tale of The Premature Burial.

This is a book that will have great appeal to both admirers of Poe and to enthusiasts of the uncanny. The eerie atmosphere of the photographs and the classic works of Poe combine to explore the infinite world of the supernatural.

Hardback only copies are available through The Marsden Archive priced at £30 signed and £25 unsigned. Click here to order. No more than 2 copies of each book is available to purchase at one time.