The Twilight Hour - Celtic Visions from the Past

Between two worlds life hovers like a star,
‘Twixt night and morn, upon the horizon’s verge.
How little do we know that which we are!
How less what we may be! The eternal surge
Of time and tide rolls on, and bears afar
Our bubbles; as the old burst, new emerge,
Lash’d from the foam of ages; while the graves
Of empires heave but like some passing waves. 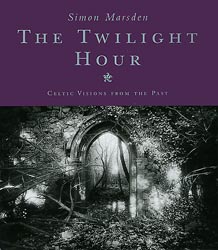 SINCE THE DAWN OF TIME all civilisations have believed in ghosts and the supernatural in some form or other. For the ancient Celts our world was not the only level of existence, another realm of demons and ghosts was always close to the surface of reality, and this ‘otherworld’ was therefore very real to them. This intermingling of physical and supernatural spheres was reflected by the twilight; the light of day and the dark of night, a time, they believed, when our earthly spirit was in danger of crossing over into this haunted domain.

These arcane beliefs are deeply embedded in the subconscious of this mysterious, poetic race and in The Twilight Hour Simon Marsden, a master of atmospheric, gothic images, has chosen extracts from the fantasy works of many of these literary Celtic geniuses, illustrating them with his own haunting photographs. He has also included some real ghost stories from their ancestral lands, reminding us of the dark pagan terrors that still haunt the present.

The Twilight Hour has been made into a feature film which was released in October 2002.