Photographers are often described as 'voyeurs' or 'outsiders', but never before had I felt such a stranger in a strange land. Everything in Russia was the exact opposite of what I had grown up with. 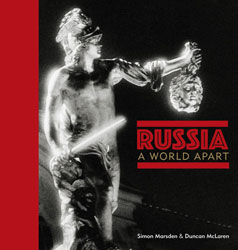 Torn apart by revolution, civil war, invasion, anarchy and the more mundane destruction of indifference, the buildings of Russia's rich and complex past have perhaps suffered more than any other country's in history. This tragedy, as well as the changing political and economic climate of the country, made it a clear choice for the final book and completes Marsden and McLaren's trilogy which focuses on the destruction of the classical estate. The previous two books being: In Ruins: The Once Great House of Ireland, and Beyond the Wall: The lost World of East Germany. Both these books are now collectors' items.

The four trips undertaken by Marsden and McLaren for the book have resulted in photographs of a diverse mix of pre-revolutionary buildings and memorials, manor houses, palaces, statuary, tombs and also more recent monuments from soviet times. Each image tells a unique and fascinating tale.

'It is important to us that foreigners have the chance to understand that Russia is rightly viewed as a place where taste and excellence have coexisted for centuries. Marsden's photographs in this powerful book demonstrate this perfectly'.

Distributed in the UK by Paul Holberton publishing, London
www.paul-holberton.net
Distributed in Continental Europe by
www.vilo-groupe.com
in the United States and Canada by Casemate Athena
www.casemateathena.com

Hardback only copies are available through The Marsden Archive priced at £30 signed by D McLaren and £25 unsigned. Click here to order.