The Journal of a Ghosthunter - Geistersuche

As we left the ancient town of Curtea de Arges for Dracula's Castle, my guide seemed more apprehensive than usual, smoking heavily and glancing nervously around us as if we were being followed. The narrow road skirts the Arges river, snaking through pastoral valleys that lie between wild crags and precipitous gorges. This is Dracula's country as I had imagined it and I began to feel as vulnerable as the unfortunate Jonathan Harker in Bram Stoker's novel. For many years now the Romanian tourist authorities have put forward the spectacular fortress of Bran in Transylvania as Dracula's lair, but it has only very tenuous associations with the folk hero. According to my guide, his actual castle at Poienari is thought to have been built in the fourteenth century during the reign of his ancestors the Basarab dynasty, but by the time Vlad came to the Wallachian throne it lay in ruins. 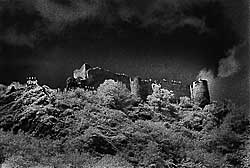 An episode in 1457 fully illustrated Dracula's ruthless nature. For some time he had suspected the loyalty of the boyars, or noblemen, in his capital city of Tirgoviste, and when he discovered that they had buried alive one of his brothers he seized this opportunity to exact a terrible revenge on them. Two hundred of these aristocrats and their families were captured by Dracula's men after a church service on Easter Day. First the old men and their wives were impaled on the city walls, then the younger, more able-bodied were chained together and forced to march for sixty miles through the rugged countryside to the ruins of Poienari. Many of them died en route; the remainder were shattered, their fine clothes in tatters, some even naked. Lime kilns and brick ovens had been built in advance and the prisoners were forced to form a human chain under the whip to convey the building materials up the mountainside. The restoration work lasted for two months and very few of the captives survived the ordeal.

Just as he was finishing this tale the dramatic and eerie remains of the castle came into view, perched precariously on top of a crag some 1,200 feet above the road. Even though only two of the original five towers remain (one third of the castle collapsed down the mountainside in 1888), it is an intimidating sight. My guide said that we could climb up the 1,440 steps to the summit, but as he was talking the earth shook with an almighty crash that sent us running for cover. We soon discovered that this was a controlled explosion to clear the road ahead, blocked by a landslide. We were both relieved to remain where we stood, and I began to photograph the castle from below.

Later, we spoke to several people in the nearby village of Arefu, where geese and pigs surrounded the ramshackle wooden houses. One old man told us how Dracula escaped from the castle when surrounded by the Turks. The night before the fortress was to be stormed, a loyal Romanian fired an arrow into the tower that contained Dracula's living quarters. It was found by his wife, who read the note and told him that she would 'rather have her body rot and be eaten by the fish of the Arges than be led into captivity by the Turks'. She then flung herself from the battlements into the river below. But Dracula followed his scouts through a secret passage leading down to the river and, with the help of the local peasants, was able to flee to Transylvania. He is said to have rewarded the peasants who helped him by granting them lands here and confirmed this gift by writing the deeds on animal skins. The old man said that these skins were still in the possession of the men's families.

As we left the village we found ourselves at the rear of a funeral procession. The hearse was pulled by four black horses with purple plumes; the coffin was confined behind etched glass. Death, however, seemed all around us.