These are no longer available. 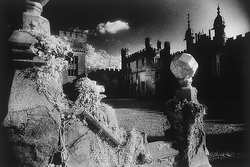 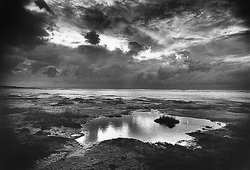 'Simon Marsden's unique photographic work is magical, haunting and eloquent. It speaks of other, stranger worlds. Simon is part photographer, part writer and part guardian of the haunted realms. He is also a consummate storyteller at once captivating in his artistry and delightful in his wit…….You really have to see him and his body of work at least once in your lifetime.'
Gray Levett, Editor NIKON OWNER magazine and host of:
'An Evening with Sir Simon Marsden' at Saint Hill Manor in Sussex

In his talks, illustrated with photographic slides, Simon describes how his childhood in two rambling haunted manor houses, set in a remote part of the English countryside, had such a great influence on his work. His father's library of occult books and his unsettling habit of telling his four children ghost stories before they retired to bed, personally filled Simon with such fear that he believes he has spent a lifetime attempting to exorcise these terrors in the extraordinary and unsettling photographic prints he has created. 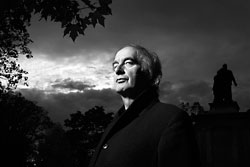 He tells how his father was also a keen amateur photographer, giving him a camera on his 21st birthday, and how he became instantly hooked by the magic of photography. He goes on to describe his career in the early days and how he created his singular style, especially through the use of infrared film, which gives his images such an ethereal, haunting atmosphere. But it is in the art of printing these pictures that he excels and as these traditional processes and photographic materials are gradually being discontinued by the advent of digital photography, it is not hard to imagine Simon in twenty years time, an old man alone in his darkroom surrounded by its ancient bottles of chemicals, like an alchemist guarding strange secrets as old as time itself.

As someone who has now published eleven books of his photographs he is also able to give an insight into the research and planning methods he uses when compiling material for each volume. He also explains the unique techniques he employs when shooting the pictures, as well as some of the extraordinary adventures he has encountered when traveling in foreign lands, which sometimes have been truly frightening, and at others outrageously humourous. 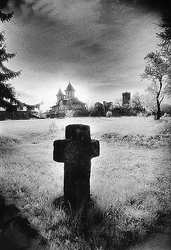 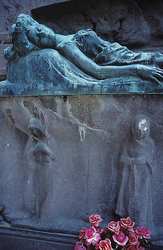 These talks appeal not only to photographers and other creative artists, but also to those who are interested in the supernatural and the fantastic in all its many diverse forms. They are one man's inspirational, obsessive journey through a haunted landscape of gothic castles, moonlit abbeys and graveyards in search of his own peace amongst the dark spirits that still haunt them.

Simon can also show the award winning 82 minute documentary/drama film The Twilight Hour (2002) made about his work and beliefs directed by Jason Figgis, as well as excerpts from Ghosthunter (1992) a 60 minute documentary/ drama film that takes Simon to Transylvania in search of Vlad Dracul or 'Vlad the Impaler' and is directed by Andrew Piddington 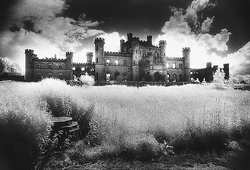 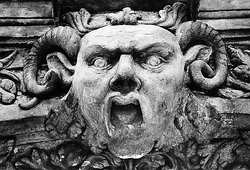 To date he has given talks and screenings at Private Houses, Universities, Art Colleges, Schools, Camera Clubs, Theatres and Cinemas, but is open to offers from all types of organizations and locations.