Follow this link to see an obituary which appeared in the Daily Telegraph. The obituary can be downloaded here.

From the very beginning of recorded time all the great civilisations of our world have believed in ghosts and the supernatural in some form or other. These are ancient mysteries and to dismiss them is to deny ourselves that arcane knowledge of the past that has ultimately fashioned our lives. For wherever we may stand on no matter which particular landscape of this planet, beneath our feet lie the many layers of these previous civilisations, which have left their irrevocable mark, not only on the physical landscape, but on our subconscious too.

I suppose it was natural that I should develop an interest in such phenomena from an early age, as I spent my childhood in two archaic haunted houses, Panton Hall and Thorpe Hall, in the remoteness of the Lincolnshire Wolds. Here I would play for days on my own in the vast parklands with only my imagination as a friend. Both my father and elder brother were avid readers of ghost stories and I inherited the family's collection of books on the genre. My favourites were Arthur Machen and M.R. James, mainly for their emphasis on mysteries as old as time itself, but also for the subtlety of their narrative. In later years I was to discover the works of Edgar Allan Poe, whose dark tales of decaying mansions and moonlit abbeys seemed somehow to mirror my own obsession with the ghosts that haunted them. 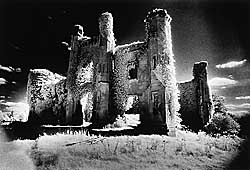 Following on from the days of playing hide-and-seek in ancient attics and secret gardens, ever vigilant for the appearance of the 'family ghost', my father, himself a keen landscape photographer, gave me an old Leica camera on my twenty first birthday and I instantly became hooked on photography. What intrigued me most was the magic of time and light and the enigma of 'reality' that these elements conjured up. Over the years I have tried to portray this in various forms in my work: the unreality of the 'real' and the reality of the 'unreal'. The first roll of film that I shot was of cardboard cut-outs of ghosts that I arranged in tableaux in the gardens. 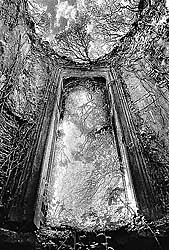 Ghosts are a controversial subject and most people have their own theories as to what they might be. It is not my intention to try and convince you that ghosts exist, but rather to hopefully inspire you not to take everything around you at face value; to show that what we are conditioned to believe is 'reality' may not be quite all that it seems, if only we take the time to inquire. It is my personal belief that the relentless advance of science and technology is robbing our world of much of its inherent mystery, and that to suppress this subconscious spirituality is dangerous. Science can explain anything away if one allows it to, just as all one's original thoughts and beliefs as a child can be eroded by the cynicism of one's elders.

I believe that another dimension, a spirit world, runs parallel to our own so-called 'real' world, and that sometimes, when the conditions are right, we can see into and become part of this supernatural domain. The mystical quality of my photographs reflects this ancient order and they attempt to reveal what is eternal.